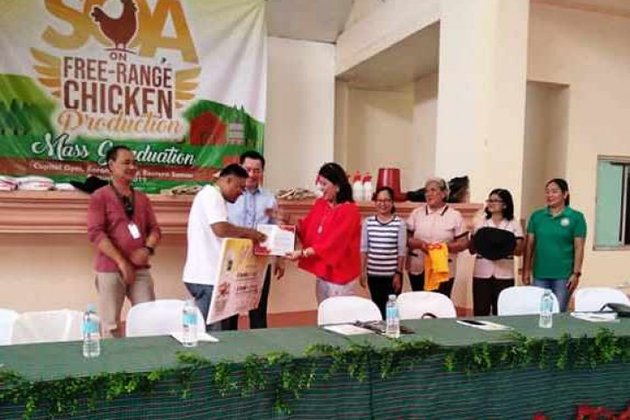 BORONGAN CITY, August 23 (PIA) -- Some 290 farmers in Eastern Samar have successfully graduated in the School-on-the-Air (SOA) Program on Free-Range Chicken Production on August 20, 2019, at the Provincial Capitol Gymnasium, this city.

The program was aired on June 28 to August 19, 2019, at DYES-Radyo Pilipinas, a government radio station.

The SOA served as an avenue for farmers to gain essential knowledge and skills in producing and managing free-range chicken.

"I salute the different agencies for continuously upgrading the capabilities of farmers in Eastern Samar," she said.

Taganas said that teaching the latest technologies and sharing the technical know-how in farming, especially in poultry production are very essential in attaining food self-sufficiency which is the thrust of Pres. Rodrigo Roa Duterte's administration.

"Extend your hands to others to share knowledge, and give others the opportunities to earn extra income as well," she said.

The two are the economic drivers that will eventually uplift the condition of the poor, said Cortez.

"The governor exerted his effort to help the farmers uplift their lives," Cortez said.

In his message, he thanked the different government agencies for spearheading the program.

"Through this SOA, the participants learned the basic requirements of raising chickens and the details of management from choosing the breed, feeding, and healthcare. The effects of climate change were also discussed as it may have implications in livestock production," Jatulan said.

Other awardees are Marlou Bondalo of San-Policarpo, Roman Beros of Maydolong, Helen Sacmar of Borongan City, and Mary Jane Capacite of San-Julian, all from E. Samar.

Each of them received four heads of male Rhode Island chicken and 20 heads of chicken plus freebies from ATI.

For his part, Mr. Byron C. Bugtas, station manager of DYES-Radyo Pilipinas said the power of the airwaves remains relevant and far-reaching, despite the digital age.

He expressed his appreciation to DA-OPAS and ATI for utilizing DYES as a venue in educating farmers on new technologies towards the achievement of food security.

He encouraged everybody to listen to the radio because he believes that in spite of the advancement of gadgets and internet-based technologies, radio is still the most effective and the best channel of communication since information will be heard in the remotest area.