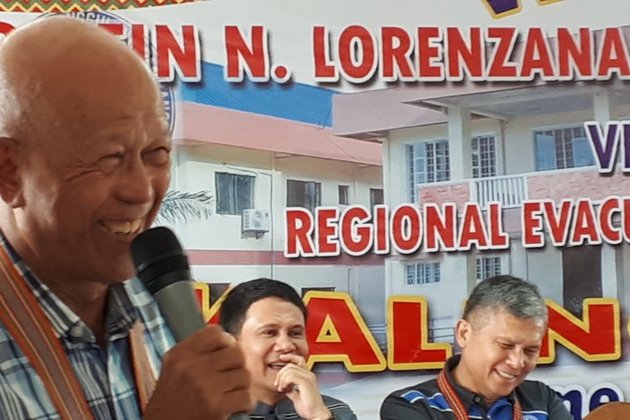 SND Lorenzana bats for evacuation center in every province, town

CITY OF TABUK, Kalinga, Aug. 22 (PIA) - - Every province must have an evacuation center. Even towns and barangays. The President wants even "ili" (villages) to have one to contribute build a resilient nation.

This was the message of Department of National Defense (DND) Secretary and National Disaster Risk Reduction Council (NDRRMC) Chairperson Delfin Lorenza during his visit to the province for the turn-over ceremony of the Regional Evacuation Center on Aug. 21, here.

He was happy to see the establishment of an evacuation center in this city saying this is alongside the policy of President Rodrigo Duterte for every town and city in the country to have an equipped facility for calamity victims.

Officials gracing the occasion were one in saying that the overall task of government is the protection, safety and welfare of the people. It is incumbent upon LGUs to remain pro-active in this role especially on disaster preparedness, and the establishment of evacuation centers is part of this direction.

Kalinga Rep. Allen Jesse Mangaoang said the Department of Public Works and Highways has so far constructed 82 evacuation centers in 52 provinces including this one while 55 are underway.

A memorandum of agreement was forged between the Office of Civil Defense, Department of Social Work and Development, DPWH, Dept. of Health and the Provincial Local Government Unit of Kalinga for the operation and management of the center.

Gov. Ferdinand Tubban said it is a great relief for the province to have this complex evacuation center. He committed to provide the necessary support especially the maintenance of the complex.

Meanwhile, Mangaoang said to solve the spread of diseases and congestion in evacuation centers and the use of schools and other government facilities, he said he will co-author the House version of bill filed by Sen. Ralph Recto seeking the establishment of descent evacuation center in every city and municipality nationwide or the "one town, one evacuation center program." (JDP/PAB-PIA CAR, Kalinga)