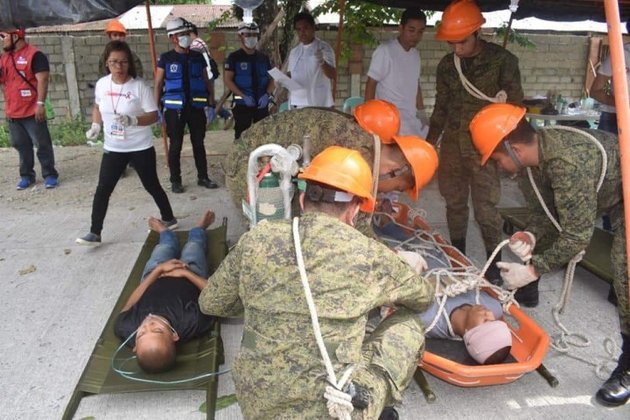 During the simulation, the participants performed the duck, cover and hold.

Thereafter, the first responders, the Disaster Emergency Assistance and Rescue Team (DEAR) elements of 30th Infantry Battalion (30IB), the Bureau of Fire Protection (BFP) personnel and Surigao City Disaster Risk Reduction and Management Council (DRRMC) provided emergency assistance to the victims as well as conducted rescue operations to those who are in peril.

The NSED is a quarterly drill that seeks to instill a culture of disaster preparedness and promote disaster awareness to all citizens, soldiers and other uniformed personnel included.

It is also done to evaluate the readiness of Disaster Response and Rescue Units (DRRU), the adeptness of their contingency plans and protocols to address natural disasters such as earthquakes, typhoons and landslides including man-made disasters such as fire and road mishaps.

Lieutenant Colonel Jeffrey A. Villarosa, acting commanding officer of the 30IB said that the men and women Python troopers, through its Disaster Emergency Assistance and Rescue (DEAR) teams, put to high regard its capability to conduct Humanitarian Assistance and Disaster Response (HADR).

"We see to it that our skills to conduct HADR operations are always honed; our equipment always ready so we can always inter-operate with our partners; and when the need arises, we can immediately shift from focused military operations (FMO) mode to HADR mode," Villarosa said.

He also said that the ironclad partnerships with other DRRUs such as that of the provincial local government units (LGUs) of Surigao del Norte and Dinagat Islands, the city, municipal and barangay LGUs, civil society organizations are their best defense against any calamity and the best offense towards the prevention and mitigation of the occurrence and effects of disasters. (1Lt. Wilfredo F. Quilang, Acting Civil-Military Operations Officer, 30IB/PIA-Surigao del Norte)