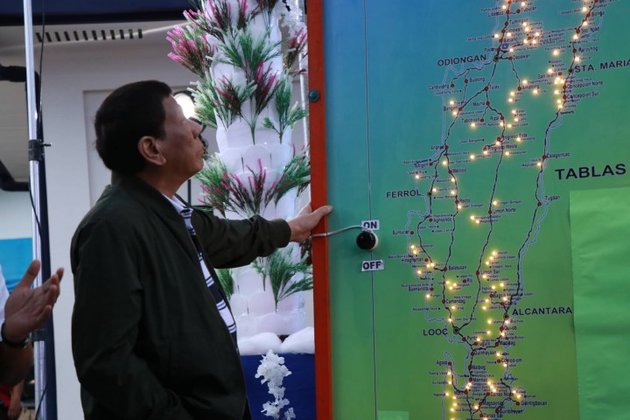 In his speech, Duterte thanked Sunwest Water and Electric Company (SUWECO) for investing on this project that will light up around 43,400 households in the largest island of Romblon. The president pointed out that it's his administration's firm policy to safeguard future generations' environment.

"I am pleased to join you today in inaugurating this hybrid solar diesel-powered plant that will pave the way to a greener tomorrow for Romblon and the rest of the country. This is indeed a milestone not only for the people of the province but for our environment as well," President Duterte said in front of 1,000 attendees.

He also added that this project emphasizes how the nationwide electrification thrust is essential in the implementation of the crucial government programs and projects.

"Projects such as this complement the government's aim to fast track the development of renewable energy sources in the country and, in the process, reduce our nation's dependence on traditional energy sources, including coal," he said.

Although oil and coal power plants are cheaper to build than solar power plants, Duterte says those two leaves a lot of carbon footprints in the country and it destroys environment.

The said power plant will serve as benchmark in the field of renewable energy as its composition will be the first and largest of its kind.

On its utilization, an estimated P180 million will be saved every year from the universal charge-missionary electrification subsidy and will save around three million liters of fossil fuel per year with the carbon emission reduction of 6,567,344 kilograms per year.

The Sunwest Water and Electric Company started its operation in Tablas Island in 2013 after entering into a power supply agreement (PSA) with Tablas Island Electric Cooperative, Inc. (TIELCO) to supply the 7.5-megawatt electricity requirement of the Island.