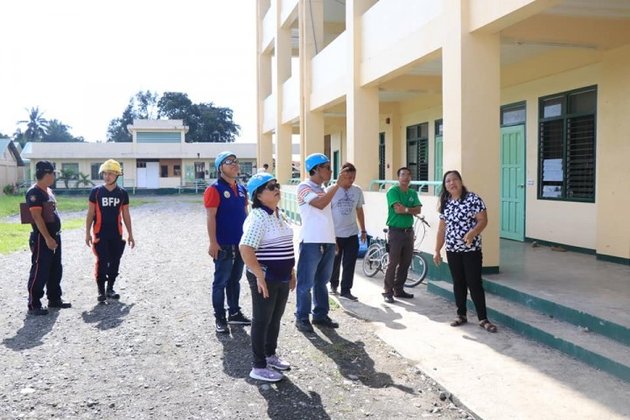 Classes in some areas of DavNor suspended due to quake

Panabo City Mayor Jose Relampagos signed Executive Order No. 51 dated October 16 ordering the "Cancellation of Classes and School Activities in all levels of Private-Public Schools and Colleges or Universities in the City of Panabo."

Relampagos released a public advisory on suspension of classes after the occurrence last night at about 7:40 p.m. of a 6.3 magnitude earthquake in Tulunan, North Cotabato identified by the Philippine Institute of Volcanology and Seismology as the epicenter. The quake was felt in Davao del Norte at intensity 5.

Island Garden City of Samal Mayor Al David Uy last night at about 8:00 p.m. posted a public advisory regarding his declaration on "suspension of classes at all Levels both Private and Public" saying the "CDRRMO and CEO (City Engineering Office) will conduct ocular inspection on our school buildings.

Uy also instructed all school officials, teachers and other school staff to "coordinate with our Local Building Officials for the inspection of our schools".

This morning, Sto Tomas Municipal Mayor Ernesto Evangelista signed Executive Order No. 2019-30 suspending classes at all levels both in private and public schools "to give way for the conduct of safety inspections of school buildings, facilities and other private and public offices as a part of the precautionary measure and standard safety protocol".

Based on reports of the Municipal Information Office (MIO), Evangelista was known to have directed the Municipal Disaster Risk Reduction Office, the Municipal Engineers' Office and the Barangay captains to evaluate school structures and barangay offices.

Per information of the Carmen MIO, classes were not held in buildings of two to four storeys. Identified school buildings of this height were in national high schools of Carmen Poblacion, Barangay Alejal, Barangay La Paz and Barangay Tubod.

Tagum City DRRMO posted public information on No Suspension of Classes in Tagum City, No Tsunami Alert while informing the public that DRRM coordinators in schools were instructed to conduct classroom inspections.

The CDRRMO also instructed malls to do its intensive checking of buildings for cracks and damages and to immediate report such.

"The City Engineer's Office will be evaluating the structural integrity of the school buildings found to have minor cracks," CDRRMO said in its information posted on City of Tagum Facebook page.

On the other hand, Provincial Governor Edwin Jubahib said he was closely monitoring the impact of the 6.3 magnitude earthquake in Davao del Norte.

Statement released through Provincial Information Communication and Knowledge Management (PICKMO department head Pat Lucero, said that the Provincial Government through the Provincial Engineering Office (PEO) was closely coordinating with the private sector in assessing the effect of the quake.

No advisory on suspension of classes was released by the governor but he left such decision to the local chief executives in cities and municipalities based on their local assessment., (PIA XI/ Jeanevive Duron Abangan)