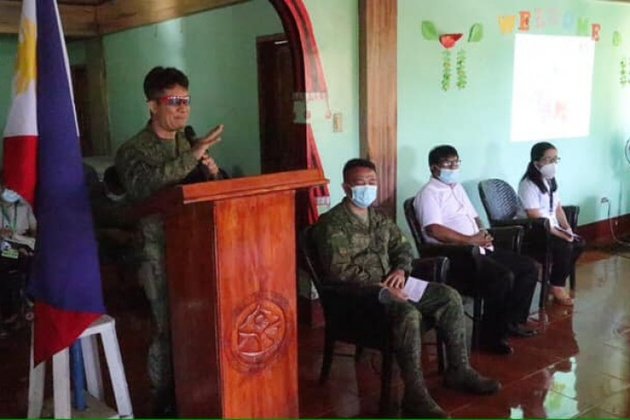 BALBALAN, Kalinga, May 11 (PIA) - - Eleven barangays of this municipality will benefit from various government programs and projects with their coverage in the Community Support Program (CSP) of the Armed Forces of the Philippines through the 50th Infantry Battalion, in partnership with the local government unit and national line agencies.

The program launching recently was highlighted with the signing of Certificate of Acceptance and Certificate of Commitment to guarantee mutual support to the CSP teams in the municipality.

With convergence of services as the strategy to bring interventions to these ELCAC barangays, grass-root planning will be conducted by Army teams assigned to gather data needed in the identification of programs or projects to be funded by ELCAC. They will also facilitate the preparation of project proposals for funding.

Balbalan Mayor Eric Gonayon warmly welcomed the 50IB soldiers as he lauded the Philippine Army's efforts prioritizing Balbalan LGU for the CSP. He said the CSP team will help the LGU in identifying community concerns, which is also a big help in the delivery of various services in Geographically Isolated and Disadvantaged Areas.

50IB Commander LTC Melanio Somera explained the CSP troops would not be bringing with them the solutions immediately, rather they would serve as facilitators in addressing the issues on the exploitation of the communist terrorists in the communities in collaboration with the LGU, partner agencies and other concern stakeholders.

He said the community and village chairman have critical roles in terms of advocating and protecting the youths and students from joining the New People's Army. "We will also conduct localized peace engagements to convince NPA remnants to surrender and avail of the Enhanced Comprehensive Local Integration Program for them to start a new and normal life.

"Your Philippine Army will be working in your areas not only to address peace and security concerns but also to help facilitate the safe delivery of government basic social services in distant and conflict-affected areas. Our aim is to bring our government closer to the people," Somera said.

Meanwhile, 503rd Brigade Executive Officer LTC Magtangol Panopio rallied the villagers to join the band-wagon and be on the side of government. "Your Philippine Army is always here as a partner of the LGUs in attaining sustainable peace and inclusive development. It is imperative that we undertake the whole-of-government and whole-of-nation approach to end the local communist armed conflict.

As confirmed by MLGOO Mediatrix Alino, upon the success of the CSP, LGUs will be mandated to sustain those projects through their inclusion in the Local Investment Plan. (JDP/PAB-PIA CAR, Kalinga)